I know this makes three green card posts in a row, which is TOTALLY REPETITIVE, but ’tis the season I guess? 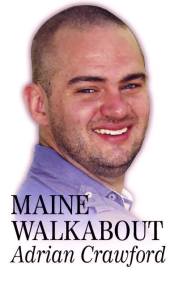 Here’s the fruits of this week’s labor – my latest column for the Kennebec Journal and Morning Sentinel. I ended up having so much content that I wrote a web-only piece that didn’t fit in the newspaper.

Shout-out to all my readers and fellow green card candidates who contributed their stories. Without further ado…

Being here really is a one-in-a-million shot

Adrian Crawford writes that millions of people every year hang their hopes of a new life in the U.S. on the ‘golden ticket’ — the green card lottery.

This past week contained a little bit of a milestone for me. Thursday marked one year since I won the lottery.

Sorry, I guess that was probably sensationalizing. You’re probably thinking, “if you won the lottery, why aren’t you on a beach in Aruba instead of behind a desk in Augusta?” Let me clarify.

It’s probably more accurate to say that on May 1, 2013, I was given a winning ticket that I couldn’t claim until November. The jackpot, rather than a pile of riches, was what’s colloquially known as a green card: 10 years of permanent residency in the United States.

Since I moved to Maine last December, many of the people I’ve met have asked me how I came to be a legal immigrant to the U.S. at all. Some members of the fairer sex have even asked me — in jest, I hope — whether I’m just a tourist looking for a green card marriage so I can stay permanently. And while people laugh when I say I won the lottery, I’m not being corny: that’s actually how it works. In my experience, many Americans have never heard about the process (and realistically, why would they need to?), so I thought I’d break it down.

Since the Immigration Act of 1990 raised the limits on legal immigration here, 50,000 places per year were set aside for “diversity visas” designed to attract people from countries with low rates of immigration to the U.S., in order to diversify the immigrant population. Variety is the spice of life, after all.

Now 50,000 visas per year may sound like a lot, but that pales in comparison to how many people apply for them, which necessitates a method of application and distribution that’s impartial and at random, hence the lottery. The Diversity Visa lottery for fiscal year 2014, in which I was a successful entrant, attracted more than 14.6 million entrants from eligible countries worldwide. You may be starting to understand why I feel so lucky to be here.

The window for the green card lottery is only open for one month, between Oct. 2 and Nov. 3. If you forget to throw your name into the ring during that month, you’ve missed out and have to wait until the following year.

After you enter some basic details — your name, address, country of origin, your parents’ heritage (no, really) — you get a confirmation number … and then you wait. For six months. Don’t forget where you wrote it down.

The day every green card lottery entrant is waiting for is May 1. From 12 p.m. EST, which was 2 a.m. Australian time on May 2 for me, hopeful candidates nervously punch their 16-character confirmation number into the Department of State website, close their eyes, cross their fingers and click “submit.”

Those in the vast majority see a form rejection letter saying they’ve missed out. The ones that stare at their computer monitors in utter disbelief, like I did on the morning of May 2, 2013, see a form letter too. Only theirs says they’ve been selected for further processing. Seeing those words meant I’d gone from one of 14.6 million entrants to one in 125,000 selectees. Figures released later showed I was one of 2,104 Australians.

The State Department chooses more applicants than there are visas to cover for entrants who change their mind about applying, those whose circumstances have changed or simply those who forget to check their number. You’d better believe there are plenty of those, too. I’ve spoken to two or three people who could’ve had green cards in November last year who didn’t check until well into 2014, and are now racing to get their paperwork in before the deadline.

But I’m getting ahead of myself. After waiting six months, and then finding out you’ve made it through to the next stage, the adrenalin is high. You meticulously fill out a pile of official paperwork, have passport photos taken, then send the whole lot to a processing center in Kentucky. And then you wait some more. In the meantime you have to fulfill the minimum standards for the visa: a clean bill of health (which costs more than $400), a clean criminal history, proof you completed high school education and evidence of citizenship in a visa-eligible country.

Starting in October, U.S. consulates around the world begin interviewing the entrants in order of where their applications were drawn out. This is the lottery within the lottery: I was lucky enough to be pulled out of the hat early, so I had my interview while there were still plenty of visas left in the allocation for the Oceania region. On Nov. 12, my visa application was granted in Sydney, Australia, just more than 12 months after my initial entry.

For me, the whole exercise — while drawn-out — was painless and I was extremely lucky. I’d never entered the lottery before, and I won very early in the process. Not only that, I managed to land a job within a couple of weeks of entering the country as a permanent resident in late November.

One of my countrymen, Sebastian Lee, had similar good fortune. The 22-year-old from Melbourne, in Australia’s Southeast, was also successful in his first ever DV lottery attempt, and is now pursuing a career in the entertainment business in California.

“Growing up on American television and movies, I’ve always wanted to visit and possibly try living in the United States,” he told me via email this week. “I decided to study film after finishing high school, and coming to study and work in the United States seemed to be the next logical step. The actual nuts-and-bolts of the application itself was an easy but slightly confusing process. The most difficult part of this process has been to leave family and friends behind in Australia.”

Throughout the journey I’ve come across many others who have spent close to a decade applying fruitlessly every year. Even more heartbreakingly, some selectees are unlikely to get an interview before the visas for their regions run out.

Anthony Priwer, a 35-year-old radio producer from Sydney, falls into that category.

“Because my 2014 case number is high and I’m nervously waiting to see whether or not I’ll get an interview, I’ve also entered the 2015 lottery as a nonfool-proof backup plan,” he told me. “So, I’ve entered the lottery a total of 10 times, which, alarmingly, means I’m now into double digits.”

Every day I become more and more settled in my new life as an American resident. And the more I hear stories like Anthony’s — and there are many of them — the more I realize just how lucky I am to have had such an easy path.

3 thoughts on “An especially relevant column”