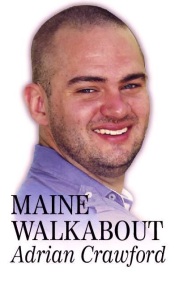 As difficult as it is for a 29-year-old man to admit it, mothers are usually correct.

That’s why I kicked off Sunday’s column this week with a quote from my own mum, whose name has now been read by literally tens of people in central Maine.

For what seems like the fifth or sixth one in a row, this column turned out to be pretty introspective and corny, but I’ve got a pretty good response from it both in person and via email.

At its essence, it’s about letting more people into my professional and personal life in 2015. I wrote it in my head while literally staring off into space in my parked car on New Year’s Eve. Inspiration comes in the weirdest places.

“Do what makes you happy, as long as you’re not hurting anybody else.”

That little gem of maternal advice has stuck with me for over a decade, and it’s a rule I’ve worked extremely hard to adhere to this past year.

For the first time in my life, I had the option (or perhaps the prerogative) to be entirely selfish and focus on my own needs and wants, simply because I was so far removed from those whom I would ordinarily put my life on the back burner to help out.

There were certainly a lot of upsides to this strategy. I’ve seen and done some fantastic things in Maine in 2014, especially once the mercury started to creep above freezing and Vacationland showed its beautiful face. All of my coworkers, acquaintances and readers were right: summer is absolutely worth waiting through the winter and the black flies for.

Outside of my working life, I’ve essentially done whatever I felt like doing, whenever I wanted to do it. I wrote two weeks ago about the emotional disconnect from central Maine that I felt for a great portion of 2014, and, given that I was initially unsure about where my professional future would take me, I was conscious about getting too close to people, too. But all the while I was as careful as I could be to not hurt anybody else along the way, as my mom told me.

But I’ve been thinking a lot about priorities in life lately, and the shifts in what’s important to me right now as my 30th birthday approaches. This happens to coincide with the beginning of 2015, and while I find New Year’s resolutions to be a fairly hokey concept, but the changes in my priorities seem to align a little bit with the beginning of a new calendar.

While it’s been somewhat liberating to only have to take care of myself, helping and looking after other people has always been something I’m passionate about. I’ve built some great friendships here in central Maine, and I’ve recently met someone who’s captured my imagination and heart in a way I never saw coming. (Ain’t that always the way?) All of these people make me want to do as much for other people again as I’ve been doing for myself.

I’ve also thrown myself into the task of helping out a local business with its social media presence, and that’s been a rewarding and welcoming way to feel more a part of the community than just being “that Australian guy.”

One of my readers called me out (in a sense) a few weeks ago, and it stung my professional pride a little bit. He challenged me to make 2015 the year that my column isn’t “all about me,” and to trust my readers. While the bulk of the feedback I’ve received from you fine folk has been overwhelmingly positive, and I could probably be content continuing with the schtick that the paper allows me to dish out every other Sunday, it was constructive criticism that’s gnawed away at me ever since.

I’m certainly not going to go as far as to say it’s my New Year’s resolution, but it does fit nicely with the aforementioned mindset that I want to do more for other people, too. Over the past 12 months, I’ve read columns in these pages by Maureen Milliken and Amy Calder that have told the stories, in both uplifting and heart-rending ways, of other central Mainers.

I’ve rubbed shoulders with a lot of interesting people since I’ve been here – including some wild members of Le Club Calumet, but that’s another story for another day – and I’m as curious to hear about them as they often are about me. As my roots in this community go a little deeper, I’d like to do the same as my fellow columnists.

I’d love to hear, and share, and tell your stories and perspectives just as often as I do mine. You all haven’t been shy about dropping me a line up until this point, and I hope that continues well into 2015. Happy New Year.