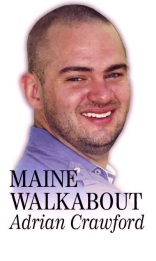 It’s no secret that when times are tough, I look to blog posts for inspiration for my columns. But rest assured, dedicated reader! They’re not all total ripoffs. I wrote a couple weeks ago about how I’m heading to Mexico at the end of April, and last Sunday’s column was about the same subject. Instead of regurgitating the same ol’ words, though, I actually put some damn effort in and did a couple of interviews. This is far more interesting than the original blog post was (in my opinion, anyway), so hopefully you’ll enjoy it.

It’s only weather … but I’m still skipping the country

Taking a tropical vacation didn’t make much sense for someone living in a tropical country, but Maine’s winter is a pretty good incentive for Adrian Crawford to escape to warmer climates this spring.

Last Wednesday, I think cabin fever may have set in. I spent an hour of my free time before work voluntarily shoveling snow. Nuts, right? The weather was glorious during the middle of the week. I think the mercury even tipped 55°F during the mid-afternoon.

I took the opportunity Wednesday morning to shovel about a foot of snow off the back deck of the place I’ve recently moved into in Hallowell. I probably wouldn’t have bothered if the warm sun hadn’t started the job for me, but with spring (briefly) in the air, I thought I’d be productive and see what the back patio looked like when it was clear.

But as I shoveled, in a T-shirt and shorts without temperature-related discomfort for the first time since before Thanksgiving, I caught myself half-wishing something particularly blasphemous.

“I wish it would stay cold and miserable until the end of April.”

Now before you storm the newspaper offices with pitchforks and flaming torches, hear me out. I said something very similar last spring, for more psychological reasons. This time it’s selfish: I only want another month of winter so that the contrast can be particularly striking in late April when the girlfriend and I head to Mexico for a week.

Over the years I’ve followed along on social media as dozens of my friends shared postcard-perfect photographs of white sandy beaches with gentle, lapping waves, umbrella drinks and all of the other stereotypes associated with vacations in paradise. And while I’ve got a couple of trips to Indonesia under my belt, I was always somewhat bemused by the concept of the tropical getaway. Y’know, since we as Australians live in a pretty enviable climate to begin with.

But now, after moving to a part of the world that’s been on the receiving end of what, 70? 80? inches of snow this winter, I finally feel like I’ve earned an escape to more idyllic climes, even for a week or so.

The concept of “snowbirds” isn’t a new one on me. In fact, the same sort of thing happens back home in Australia, albeit in reverse, when people from the cooler southern states retire to Queensland, the subtropical state where I’m from. But since I (for some reason) still revel in the unfamiliar winter conditions, I never thought I’d be doing it myself.

Paul Dube, the president of Lewiston-based Dube Travel, has been selling vacations to Mainers for 53 years, and he reassured me that I’m certainly not the only one looking to thaw out, “especially in the last two (to) three years as the economy in Maine has started getting rolling again.”

“It’s really ticked up and we can see that when people are booking in the fall for the winter,” he said. “I would suspect that this fall is going to even be busier than the past because of the rough winter we’ve had. People are going to say ‘If we’re going to have another one of those, we’d better start booking early.’”

Weather can be hard to predict, though, even for the experts, so not everyone can plan ahead. Dube said he deals with customers who’ll book on a moment’s notice.

“We’ve had it this year, absolutely,” he said. “In February, people are just ready. Cabin fever was really setting in. They did come in and they’d say, ‘Get us anywhere we can go that’s warm,’ they didn’t care where they were going, ‘just get us out of here.’”

For some, though, it’s not a vacation as much as a permanent relocation. I feel like I’ve seen enough sunny-all-year-round seasons to last me a lifetime, but it seems Mainers feel the same in reverse.

Deb Holtz, formerly of Augusta and Winthrop, told me she lived in Maine until she was 11 and in the Northeast until she finished her schooling. The lure of tropical climates enticed her to visit Hawaii in 1976.

“(I) met the nicest people, and decided to move to Hawaii ‘for a year.’ No more snow!” she told me this week.

“I was working in the ICU at Queens Medical Center, Honolulu, and met my future husband about 14 months later. He was a pharmacist there. He was from Milwaukee, Wis., had moved to Hawaii with a friend and … they too were escaping the snow.”

Their mutual love of sailing and diving took the Holtzes to Florida, where they now live in Dunedin, bordered by the Gulf of Mexico. Sounds great, but what about Vacationland?

“I love the fall colors, and the change of seasons, but I’m very cold intolerant,” she told me. “I only go back to Maine for family events now, and would not consider moving back to the cold climate.

“In 2011, we bought a foreclosure home on the Big Island, and that’s where I hope to retire. It has the open spaces, beautiful water and year-round nice climate, that my body and psyche prefer.”

Makes sense, right? So you’ll forgive me for having been stunned when I met Sonja and Don Fraser, a couple who picked up and moved from Tampa Bay to Hallowell last summer with their two kids.

“After living in a much bigger city, we enjoy the lack of traffic, the friendliness of the residents, the low crime rate and the overall sense of community we have here in Hallowell,” Sonja, 47, told me. “We just couldn’t imagine liking anywhere else as much as we do Maine.”

That’s not to say it’s all roses, of course. Sonja said there have been “brief moments” this winter when the family wondered whether they’d bitten off more than they could chew.

“And then we remember how sweltering hot August is in Florida and we realize nowhere is absolutely perfect,” she said. “We have been stuck in snow and had to push the car. Those were less than perfect moments but overall, our attitude is that it’s just weather.”

That’s not a bad philosophy, if you ask me.

But that doesn’t mean I’m going to cancel my vacation.