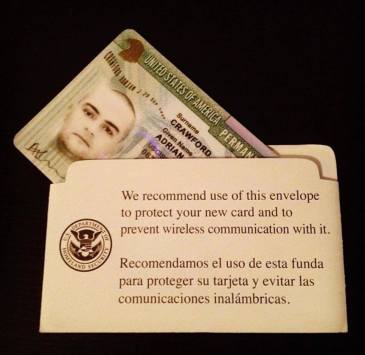 Earlier this week, my esteemed former coworkers at the Kennebec Journal dropped me a line to ask whether I’d write an opinion piece about something very near and dear to my heart: the green card lottery.

It wasn’t out of the blue, of course. The president had put the Diversity Visa in his crosshairs after it was revealed that a guy accused of an act of terrorism in New York City had also come here as a green card lottery winner.

And since I can never resist writing about myself, or the lure of freelance money, I agreed. Here it is in its entirety, but before you read it, would you consider clicking this link right here so that the KJ gets the reciprocal traffic? You’re the best.

UPDATE: I also spoke with Buzzfeed News this week about the same thing, and had a little appearance in a backgrounder video they made, which you can check out below.

Trump wants to end the diversity visa lottery that brought these people to the United States. pic.twitter.com/0MLuiX3apK

Over the course of the past four years since I immigrated to the United States, there have been a handful of events unfolding on these shores that have prompted concerned text messages from loved ones back home in Australia.

Some came during the polar vortex and a brutal ice storm in late 2013 as I hunkered down in central Maine, having only seen a couple inches of snow total in all of my 28 years.

Other worried parties touched base in the fall of 2015, when Hurricane Matthew skirted along the east coast of Florida, where I had relocated to work for The Palm Beach Post.

Mere months earlier, the Sunshine State had made headlines internationally by way of a mass shooting at Pulse nightclub in Orlando, and I had to reassure parents and friends that I was well out of the danger zone.

But on Wednesday, for the first time, I received a text from a good friend and former coworker asking whether my tenure in the U.S. was going to be endangered by a less tangible news event: President Donald Trump’s call to end the Diversity Visa (DV) Lottery Program, or what’s known colloquially as the green card lottery.

The move comes in the wake of Tuesday’s terrorist attack in Manhattan, where eight people were killed and 11 injured after a pickup truck mowed down people along a popular bike path near the World Trade Center.

The man accused of the attack, Sayfullo Saipov, is an immigrant from Uzbekistan who entered the U.S. on — you guessed it — a lottery green card in 2010.

But what exactly is the program? As a relatively new resident of the U.S., I get asked this a lot by locals, and I never mind explaining because, realistically, there’s no reason why citizens would need the knowledge that millions of people worldwide throw their names in a virtual hat every October and November in the hopes of being selected.

Since the Immigration Act of 1990 raised the limits on legal immigration here, 50,000 places per year were set aside for “diversity visas” designed to attract people from countries with low rates of immigration to the U.S., in order to diversify the immigrant population.

I entered the 2013 lottery in the northern fall of 2012 after returning from a six-week vacation in the U.S. determined to try my hand at living and working here. It was my first ever entry in the lottery, which has been running annually since 1995.

By the following May, when it was time to check whether my entry had been successful, I had already investigated other ways to legally migrate. But even as a healthy, university-educated professional with a clean criminal record and no dependents, my options were sparse.

As luck would have it, I was chosen in a group of 125,000 selectees from more than 14.6 million entrants from eligible countries around the world and ultimately, on Nov. 12, 2013, I was granted 10 years of permanent residency in the U.S.

My green card — which isn’t all that green, but I guess they were in years past — is good through 2023, provided I don’t leave the country for longer than one year at a time. After five years of residency, I’ll be able to apply for citizenship.

I can work for virtually any employer, as long as it doesn’t require a security clearance. So far I’ve only tested that opportunity out in the journalism and service industries but, unlike with other visa types, my eligibility to remain in the country isn’t at the mercy of an employer who sponsored me to be here, a process which (anecdotally, at least) can be prohibitively expensive as well as a daunting concept.

There’s no indication — at this stage — that green cards awarded to lottery winners will be retroactively restricted, but it’s a reasonable concern. I’ve made a life here since November 2013, having enjoyed vastly different lifestyles and experiences in Hallowell, Maine, and West Palm Beach, Fla., before putting roots down earlier this year in Denver, Colo.

Moreover, I don’t have the desire nor the means to return to Australia. While all of my family and many of my friends are back in Brisbane, where I grew up, life moves on when one leaves a place. The old saying “you can’t go home again” really does ring true in more than one way. The U.S., and Denver, is where I call home now.

Reflecting on this, it’s difficult for me to feel anything but disappointment at the idea that the green card lottery program could be scrapped. The proposed replacement is a merit-based solution, and much was said this summer about the qualifying standards in Trump’s Reforming American Immigration for Strong Employment (RAISE) Act.

The proposed test took into account, among other things, an applicant’s age, earning power, English proficiency and even whether the green card hopeful had won an Olympic medal, Nobel prize or other international honor. Put simply: if this was the bar in 2013, I would’ve been ineligible for a green card, even as a healthy, university educated, professionally employed, single 28-year-old male with a year’s salary in his savings account.

I never won Olympic gold, and in the journalism game I’m never going to earn a million bucks in a year but it was my dream for as long as I can remember to live in the U.S. Four years ago, I made that dream a reality when I literally won a lottery. I pay my taxes, I’ve juggled two jobs for the bulk of the time I’ve lived here, and I’m grateful for every opportunity I’ve had since I made the move.

The whole intention of the Diversity Visa Lottery Program is right there in the title: diversity. I come from a country that prides itself on being a cultural melting pot, with influences from as near as south-east Asia and as far-flung as Lebanon. Diversity strengthens all of us.

It opens our minds to new ideas and perspectives (and foods!) This great nation was also built on the foundations of immigration and multiculturalism, and it’s still evident today, from Chinatown in San Francisco to the Little Havana neighborhood in Miami and dozens of places in between.

I understand public safety and homeland security has been an enormous political talking point for the more than 15 years since the events of Sept. 11, 2001. But for every Sayfullo Saipov, accused of committing an unspeakable act of terror, there are literally hundreds of thousands of people just like me, who go to work and school and make the most of the opportunity this country has given them, all the while bringing a piece of their cultural experience to the table.

The president’s plan to deny millions of people from around the world opportunity to offer a part of their heritage to the already rich tapestry of the United States, in an attempt to avoid a senseless tragedy that can (and has) just as easily be perpetrated by a born-and-raised American citizen, is a short-sighted one that can only serve to make the U.S. a less enriched place to live, work and visit.

Whether there’s anything to be done that could change the lottery system, though, is a more difficult question. Viewing the selection and application process from my perspective — that of  the aforementioned 28-year-old, professionally employed, health white male with no dependents — probably doesn’t give an accurate representation. I’ve said for the past four years that I was possibly the simplest demographic for consular officials to process.

My application was in no way made more complex by health concerns, insufficient education or employment experience or the lack of funds required to convince the U.S. government that you would be able to support yourself if need be. A family that interviewed at the same time as me, in a wide-open room that looked like a DMV, was grilled about the father’s work history because his current job title wasn’t on the list of accepted employment qualifications.

The most obvious options for “filtering” lottery green card winners would presumably be raising the cost of processing (already around $500 all told for federal criminal background checks, a medical examination and chest X-rays, plus travel expenses to Sydney for processing), or increasing the education or employment standards, I don’t see where the U.S. could realistically improve the “net.” And raising those levels would, as far as I’m concerned, contribute to a more “whitewashed” system where only the affluent who can afford higher processing fees and boast well-paying employment and deeper education would be eligible. That doesn’t increase diversity in the slightest.

The green card lottery system isn’t perfect, and it truly is a lottery in the sense that there are far more players who miss out than those who win. But in terms of objectivity in an attempt to increase the diversity of a nation where so many people proudly claim their foreign ancestry, it seems to be working just fine without tinkering or outright termination.